Does Talanoa Hufanga have the potential to be one of the best surprises in the NFL? 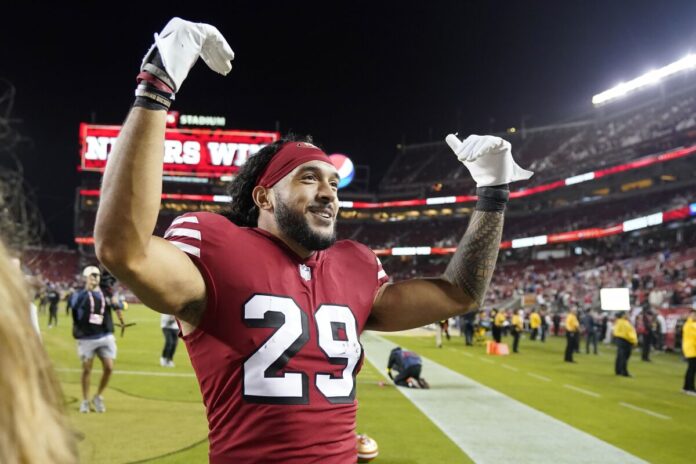 Does Talanoa Hufanga have the potential to be one of the best surprises in the NFL?
Talanoa Hufanga has been the main bright spot in a San Francisco 49ers’ defense that has impressed of late. Not only that, he has made an impressive start even being a rookie.
He’s only 22 but has made great performances with the San Francisco 49ers so far. He is by far, the best player that the Niners could have gotten.
On Monday, Talanoa Hufanga was crucial to the San Francisco 49ers getting a seventh straight win in the regular season.
Talanoa Hufanga came into 2022 as an unknown and talented young prospect, and almost a month ago, the football community around the globe started to know more about him.
Hufanga’s pick-six against the Rams sealed the win, but it is only a little bit as he had an exceptional month.
Overall, he has completed 25 tackles and four passes defended. Not just him, but the entire Niners’ defense has a chance to make history on the pitch.
According to The Athletic, in only four games, they have allowed 0.84 points per drive and an incredibly low 3.81 yards per play, the sixth-best average among all defenses in this century.
As stated by TruMedia, the 49ers rank second in average rushing yards before contact (0.72).
It explains a lot why through four weeks, the Niners’ defense ranks first in the NFL in six categories: Points allowed per game (11.5), Defensive EPA (35.58), Yards per rush (2.87), Yards per play (3.81), Yards per game (234.5, tied with BUF) and Sacks per dropback (10%).
The Niners’ defense will continue to be a decent and hard task for their competitors, but definitely, for a first-year starter, Hufanga has given a lot of good impressions and if he continues that way, the sky is the limit for him!