All Hands on Deck for Decimated Defense 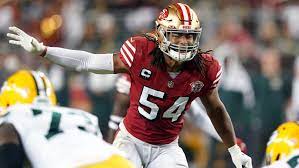 There’s no sugar-coating it, the once-mighty Niners defense has been decimated by injuries. After looking historically good in the first few weeks of the season, cracks in the foundation started to look like permanent fissures last week against Atlanta. Going into this weekend against the Chiefs in Santa Clara, linebackers Fred Warner and Dre Greenlaw are the only remaining healthy starters from the preseason.

Despite the doom and gloom, there are some glimmers of hope on the horizon. After sitting out last week against the Falcons, Nick Bosa was on the practice field Wednesday. While the Defensive Player of the Year candidate remains “pretty optimistic” he will overcome a groin strain and return on Sunday, none of his fellow first-team linemen Samson Ebukam (Achilles tendinitis), Arik Armstead (foot), Javon Kinlaw (injured reserve – knee), and Drake Jackson (knee), were able to practice.

Even if he takes the field with backups, Bosa is the kind of elite playmaker whose presence elevates the play of everyone around him. But if he isn’t able to suit up, it’s hard to imagine the Niners winning in the trenches against the Chiefs.

Things don’t get much better on the back end of the defense. When hard-hitting safety Talanoa Hufanga entered the concussion protocol on Monday, the entire starting secondary from the preseason was officially put on the shelf. Cornerback Emmanuel Moseley (injured reserve – knee) will not return this season, and his counterpart Charvarius Ward (groin) left the game last week in Atlanta and is questionable for Sunday.

Jimmie Ward is back on the practice field after breaking his hand in Carolina, but the all-pro safety is sporting a massive club on his left arm. Ward is confident he can play with the club on Sunday, telling reporters, “I don’t think I have a choice.” When asked how it affects his game, the brash Ward replied, “I guess I can’t hold a guy. Shouldn’t get any PI’s.”

At this point, Niners fans would be thrilled to see a one-handed Ward take the field against the freakishly talented Patrick Mahomes. This defense needs all hands on deck, even if only one is functional.