How further can the 49ers go with Jimmy Garoppolo? 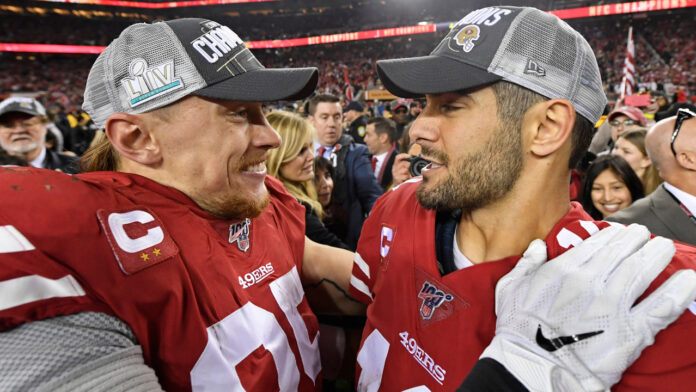 Over the last three weeks, since Garappolo started to play as the main quarterback, the 49ers have recorded two wins and a defeat. Have they already found their savior?

On Monday, Jimmy Garappolo put out one of his best performances so far. Taking a closer look over the past seven months, Jimmy Garoppolo’s situation with the San Francisco 49ers has changed completely.

Thus, following Trey Lance’s absence for the remainder of the season, the quarterback took over as the primary starter.

Jimmy G. has played three games for the Niners in the regular season and has gotten three passing touchdowns while recording 604 yards.

But, against the Los Angeles Rams, Garappolo has made his best performance over the year, picking up 92 yards of completions on short passes with long runs to Deebo Samuel, who had done 57 yards and a touchdown.

Moreover, there is Kyle Juszczyk, who has gotten a 35-yard gain en route to a passer rating of 100.7

This new-found chemistry with the Niners is pretty impressive, but the question remains: can Jimmy Garappolo make a turnover at Nfl this season?

It is too soon to answer that, but we should remember that unfortunately Garappolo still does not share too much confidence to the 49ers’ fans.

This coming October could likely be his game-changer month, and then it will be crystal clear to the football community if he remains an irregular player or not.