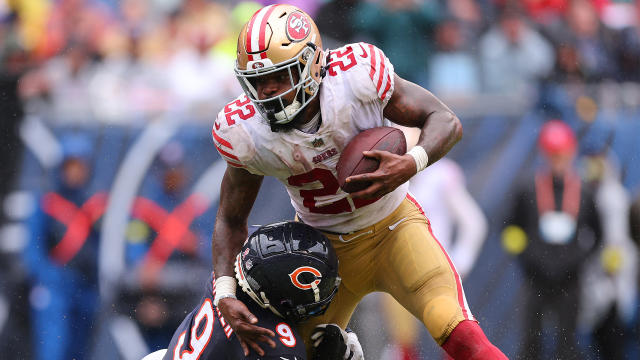 Give credit to Niner Nation, they really showed up in Charlotte yesterday. A sea of red dominated the stands, with only sparse patches of the home team’s turquoise representing that this was, in fact, a home game for the Carolina Panthers. For this afternoon, you might as well have changed the name of Bank of America Stadium to Levi’s East.

It became especially apparent on the TV broadcast five minutes into the first quarter. With the Niners already up 7-0, Kyle Juszczyk caught a nine-yard pass and a chorus of “YUUUU!” rained down on the field, prompting the announcing team to note the heavy San Francisco bias in the stands.

Later in the 3rd quarter, Juszczyk put a would-be tackler on his back with a vicious stiff arm and turned upfield for an 18-yard gain for a key third-down conversion. The stadium again echoed with the sound of “YUUUU!” When Jeff Wilson, Jr. capped off the 13-play drive with a short touchdown plunge, he was greeted by a wall of red in the stands behind the end zone.

If that wasn’t bad enough for the home team, when the Panthers had the ball, their fans repeatedly countered the Niner Faithful with a chorus of “BOOO!” That’s right, they were booing their own team. This was straight-up embarrassing for the Panthers organization, and it appears ownership took note of both the play on the field and the imbalance in the stands, as they fired coach Matt Rhule on Monday morning.

The combined forces of the Niners team and fans traveled across the country to put the final nail in the coffin of this Panthers regime. The Niners will stay in the South this week, as they take a short trip down to Atlanta for a matchup with the 2-3 Falcons. We’ll see if Niner Nation will take over Mercedes-Benz Stadium this Sunday at 10:00 AM (PST).