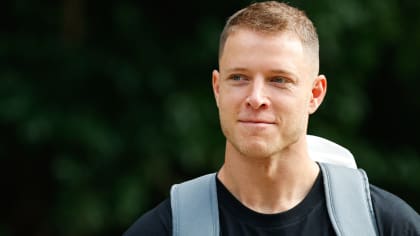 Two weeks ago the Niners went into Carolina and beat the Panthers so thoroughly that they promptly fired their head coach and essentially gave up on the season. But the raid didn’t end there. Last night, they continued to loot the coffers of their fallen opponent, acquiring their best player: the dynamic dual-threat running back Christian McCaffrey.

In exchange for a handful of draft picks, San Francisco will have the modern-day version of Roger Craig in the backfield. In 2019, McCaffrey joined Craig (1985), and Marshall Faulk (1999), as the only players in NFL history to eclipse 1000 yards both rushing and receiving in a single season.

Like now-teammate Deebo Samuel, McCaffrey can line up in the backfield and pound the rock or split out wide and run crisp routes. Few linebackers in the league can keep up with him in space, and once he gets the ball, he’s tough to bring down. With these two multi-purpose players on the field, the possibilities are endless for Mike Shanahan.

In addition to the diverse skill set, the Stanford product returns to the Bay Area with something to prove. McCaffery put up great stats in Carolina, but appeared in just one playoff game in five seasons. His past two years have also been shortened by injury, so his star has faded a little.

He fits in perfectly on an offense that has Super Bowl aspirations. With a plethora of options at the skill positions, the Niners can limit his usage and hopefully keep him healthy for a deep playoff run. The shelf life is short for NFL running backs, and now in his age 26 season, McCaffrey will have his best chance to build a winning legacy with the Red and Gold.